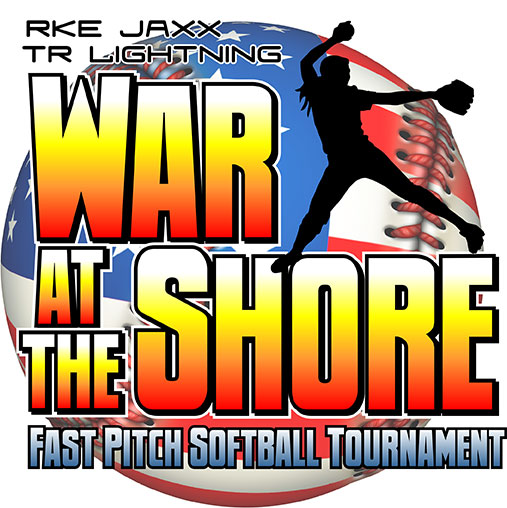 18th ANNUAL WAR AT THE SHORE

Please follow us War at the Shore 16U & 18U  Text Notification Line
Dial this Number: 810-10 then Text this message: @k33g78
To Play in this Tournament your Team must be USA- Softball Registered – you can Register online at: https://www.usasoftballnj.com/page/show/1673620-team-registration

If anyone feels they cannot or will not meet these guidelines, then do not participate in the event until such time as you and your team are able to do so or until after the recommendations and requirements are removed.

If someone contracts the virus as a result of participation in any fashion,
USA Softball of New Jersey, RKE JAXX & Toms River Lightning
softball organizations & their officers, USA & or Tournament Softball Umpires, or any facility owner are not to be held liable.

Masks will need to be worn in common areas, snack stand area and wherever 6’ social distancing is not able to be maintained.

*There will be NO TOLERANCE for any arguing with umpires!  If you have a question, call time, and ask it like a lady or gentleman.  Any coach or fan who is “out of hand” will be ejected and done for the weekend

Part of the requirements the State of NJ has put into place requires the asking of a health questionnaire and verifying temperatures of all players, coaches, umpires, volunteers and staff.  In addition, we are going to require the
signing of the Covid-19 waiver form

The process will be as follows until further notice:

Welcome to the 2020 War at the Shore  In this packet, you should find the following information:

Friday and Saturday schedules and the Sunday seeding brackets can be found at:

Be sure to recheck your team’s schedule as late as Thursday August 14 to make sure nothing has changed (i.e., team dropping out, etc.).  It may mean your game may be moved to a different time or field.

If you have any questions please call :

We are looking forward to a wonderful weekend of softball.

A LIMITED AMOUNT OF WAR AT THE SHORE WEAR T-SHIRTS WILL BE AVAILABLE AT:

Registration on Your Opening Day :

Each team must drop off a copy of your Roster, Covid -19 Player Waivers,USA Softball Registration and Proof of your Insurance.  You must bring this information and present it to us at the Registration Table located:

Under the Tents at N. Bay Ave & YMCA Complex’s

EITHER PRIOR TO ARRIVAL OR AT REGISTRATION, PLEASE PROVIDE US WITH AN ACTIVE CELL PHONE NUMBER SO WE CAN CONTACT YOU IN THE EVENT OF ANY CHANGES DUE TO WEATHER.

Tournament will pay Umpires in Sunday’s Championship A Games.

5 game guarantee –   2 Games each on Friday & Saturday ( NO Exceptions)

Note: 16U & 18U are considered Advanced USA Softball Play – Metal Spikes are allowed.

NOTE: 16U & 18U Teams will be mixed together in Saturday Pool Play – but will be separated for Championship Play on Sunday

16U &18U Divisions will play Showcase Rules in POOL PLAY ONLY-  Teams may use unlimited defensive substitutions during Pool Play on Fri & Sat ONLY and bat All Players. This means that you may put the All your girls that you want to hit in your lineup, then put the girls in the field that you want to play defense. Defensive players may be changed at any time. Any changes made to the batting order must be reported to the Umpire & opposing team. Umpires do not need to know the Defensive changes, nor the re-entries unless they are going back in the batting order. However if you are batting all your Players and an Injury occurs – that spot in the Batting Order will be an out.

Both 16U and 18U Sunday Brackets are pre-seeded to allow teams to play as many different opponents as possible.

Teams will be responsible for all Ump Fees in Sunday – ‘B’ Brackets.

On Sunday Teams will be placed in Single Elimination Brackets –

In Age Groups of 16 Teams or more,  Teams will be seeded 1-8 For Championship “A” Bracket and Bottom 8 to “B” Bracket (or whatever amount of teams we have in each age group) for “B” Bracket –
Tournament reserves the right to add Teams to either Bracket when there are Pools with an Odd number of Teams.

Sunday in Elimination Play – No inning will start after 1 hour and 20 minutes, but if the game is tied at that time, we will play the ITB in whatever inning we are in.
Only the Championship Games on Sunday, all games will be full seven Innings.
10U Age Group (6) Innings  . Run Rules will still apply in all age groups.

If a team is charged with stalling in Pool or Elimination Play, the Penalty may be to either Finish the Inning or Revert to the score of the to the Previous Inning.

*  Refund Policy- Once your check is accepted there will be NO REFUND if your Team drops Out unless we can replace you.

In the Event of The Tournament is completely Rained Out ( NO Games Played) Your Team will receive a $200 Refund. Once the Tournament Starts – NO REFUNDS –

We recommend after each game, of the Winning Coach to Double Check the Umpire’s scorecard after the game.

If the Umpire posts the score with the wrong team winning, that score will stand. It has happened !

It is the responsibility of the Winning Coach call the scores to:

15 Minutes after your game ends.

If a Team has no substitutes the Last Out may be used as Courtesy Runners.

THE MERCY RULE IS:

PITCHING DISTANCE IS 40 FEET for 12U